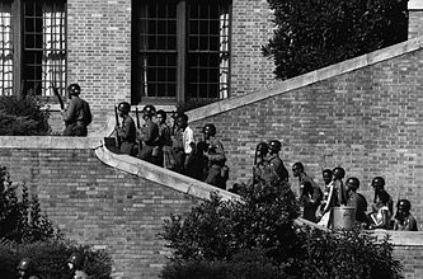 Most of the students who were being transferred to LRCHS thought that it would be the school year of their dreams...if their dreams were nightmares that is. On September 3, nine high school students got ready for school. Eight of them showed up at Daisy Bates' house, a local NAACP representative. One student, Elizabeth Eckford, did not have a phone so she didn't get the message. She got off of the city bus a block away. Soon a mob approached her and started to taunt her. Eckford later recalled that walk was "the longest block in my life".  Weeks later on September 25, the students were escorted into the school by the National Guard, which President Eisenhower called to Arkansas to bring order within the ordeal. Even though with soldiers present at all times, the students received very little acceptance and was subject to hazing on a daily basis. Ernest Green, the only senior, graduated in May of 1958. He broke the color barrier at Little Rock Central High School.