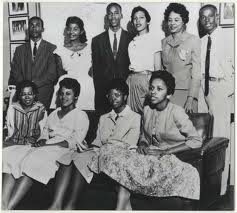 Little Rock Nine were
nine brave people the tried and successfully
integrated in the white only school, Little Rock Central High. Even though they were bullied and
threatened by more than fifty people, but they achieved a good goal and a huge
leap in the civil rights movement. The Nine consisted of Ernest Green, Minnijean Brown, Melba Patillo, Carlotta Walls, Elizabeth Eckford, Thelma Mothershed, Gloria Ray, Terrence Roberts, and Jefferson Thomas. Ernest Green was the only senior in the group and graduated as the first African American at Little Rock Central High.
Powered by